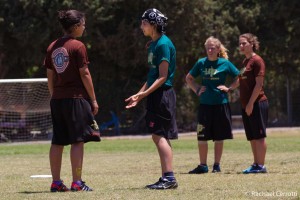 Ultimate is the ideal team sport for uniting divided societies and cultures. Much like other field-sports, this 7 on 7 game combines fast-paced action with the need for exceptional team cooperation, and all that is needed is a plastic flying disc. Yet what distinguishes Ultimate from other sports and attracts players and parents alike is what is known as “Spirit of the Game”.

Ultimate was designed to promote not only athleticism, but character and sportsmanship. As such, the sport is officiated by the players on the field. Opposing players must decide among themselves if someone has committed a violation or if the rules have been infringed upon in some way. Once those involved agree on the best call everyone can proceed with the game.

When the responsibility of how to resolve a difference is placed solely upon the players, they must learn many new and important skills. Listening to another point of view, finding common ground, and resolving differences amicably are all core competencies of a great Ultimate player. These are interpersonal abilities that can have extraordinary impact on the field and well beyond. Imagine the advantages youth from different backgrounds will have in their adult lives as they work together to resolve some of the world’s most difficult challenges. Ultimate Peace is an investment in the future of these children and their communities.

In many ways, Ultimate strives to revolutionize sports. Prioritizing personal accountability prevents the pushing, kicking, or grabbing we see in other sports when a referee isn’t looking, because the official is actually your opponent, who can and will say to you, “That was a foul.” Since Ultimate’s infancy, a common and powerful dynamic has emerged–players literally grow up as a result of playing this game. Ultimate Peace strives to build upon this phenomenon, emphasizing five core principles: mutual respect, friendship, non-violence, personal integrity, and fun. As one well known Ultimate player said: “If my team wins but my opponent does not respect me, what have I won?”

Ultimate Frisbee is relatively young, yet it is one of the fastest growing sports in the world. Invented in 1968 by high school students, the sport has evolved significantly from its original “American alternative sport” status. No longer misunderstood as a game played with a toy or involving dogs, Ultimate today is a bona fide mainstream sport, played competitively and recreationally by millions all over the world. In fact, more than twice as many Americans regularly play Ultimate (over 800,000) than rugby and lacrosse combined (read more about USA Ultimate).

Thanks for alerting me to this inspiring project. It is an important new step in the life of Ultimate. My current projects focus on building cultures of peace through interfaith dialogue, and I have been hoping that someone would introduce Ultimate into this work. In my mind, your project hearkens back to the roots of the sport–where opposing teams learned to value the intense energy they created together, which helped players de-emphasize excessive hostility and competition, and carry themselves to a next level of the “ultimate” experience.
– Jared Kass, Ph.D., Jared is one of the co-founders of Ultimate. He is a Professor of Counseling and Psychology at Lesley University, and a Visiting Scholar at the Episcopal Divinity School in Cambridge, Massachusetts.