Camp UP is the culmination of the Ultimate Peace year-round program. The week-long sessions provide a unique opportunity for hundreds of youth from our diverse communities to live, play, eat, and lead together in a joyous action-packed overnight camp. It is this 24/7 immersion experience that breaks down barriers and cements these fragile yet vital bonds through a shared experience of practice, competition, fun, and connection. 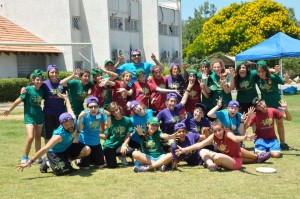 Camp UP had its first season in 2010 and celebrated its 10-year anniversary in 2019. The camp has been held at Kfar Silver in Ashkelon as well as at Kanot High School in Neve Mivtah. Camp staff is a made up of local coaches from the Middle East, international coaches who travel to the Middle East for camp, and other staff who provide educational, medical, media, and recreational support. Middle East LIT’s and US LITs also work with staff and support all their efforts.

During camp, campers get coached by some of the best players and coaches in the world. In addition, the daily program also focuses on:

Below are a few stories from camps during past years. 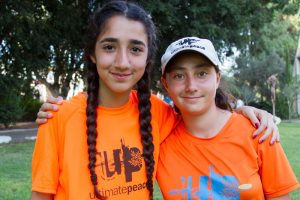 After months of intense preparation, a handful of magical and precious Camp days went by like a blink. Yet even as the indescribable feelings slowly recede as campers and staff reenter their busy lives, there is something very permanent that remains.

Camp UP 2016 was exactly what we wanted it to be: smaller, deeper, and stronger than any Camp UP before. Campers and staff alike are forever changed. There is no going back to the way we were before camp, the way we thought, how we felt. Even for those who have been to camp multiple times, those changes happen every year – they simply never stop. It is always a breathtaking experience. It is why we return. 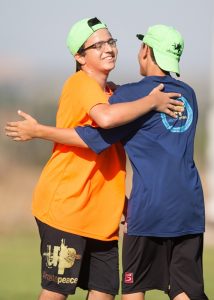 One night in the dining room we all realized the extent of the impact of the UP program. The campers, losing all inhibition, formed a conga line and ended up on stage singing with passion while they waved their painted team flags. How does it come to be that 100 Arab, Jewish, and Palestinian youth can co-create a magical moment like this, with no awareness of or care about any one person’s culture or religion or nationality? 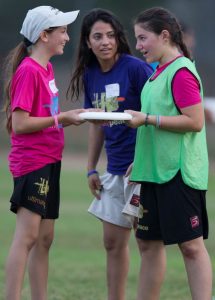 It takes a lot of work. Yet as you can see, it’s well worth it. These are the daily videos broadcast from camp; one of them includes some footage of that special mealtime. Day 1, Day 2, Day 3, Day 4, Day 5, Day 6 (and last)

UP is going well beyond the idea of coexistence – we know now this next generation can do much more than just get along – they can be loyal teammates and respectful opponents on the field, and true blue friends and allies off the field. You could actually see and feel the relief in the air among the campers as they get to know and befriend peers from the opposite side of the Middle East conflict. They have been waiting for this opportunity for years. We now believe they will be creating more of these moments for themselves and others for decades. 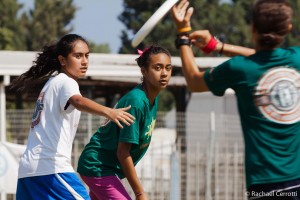 Ultimate Peace went through an extraordinarily complicated, emotional, and exuberant summer in 2014. Below is our story from this dramatic camp season that happened as the upheaval in the Middle East unfolded.

Due to the 30 days of Ramadan coming early in the summer, we had to schedule both camp sessions to conclude by June 28th. This forced us to commence the camps right after school ended in the Middle East, and to run them concurrently. We also had to find a new, affordable camp site to accommodate the larger amount of campers and staff. As it happened, we discovered the perfect place, Kfar Silver, an absolutely great fit for Camp UP. Multiple fields with lights, our own pool, a huge gym, nice dormitories, all on a private grassy school campus vacated for the summer. Its location, Ashkelon, was a concern from the outset, being 8 miles from Gaza, but we hoped tension would not rise in the region around camp time. We were in for a big surprise.

Our talented and diverse staff arrived at Ben Gurion Airport during the days following the kidnapping of the 3 Israeli teens. Over 80 wonderful volunteers, coming from the USA, Canada, Brazil, Australia, China, Uganda, Germany, and Great Britain were taken aback by the feeling in the air. The country was tense. The search was on for the 3 boys in the West Bank, a few rockets had already been shot in the South from Gaza, and people were on edge.

The borders between Israel and the West Bank had been closed, and we were hearing that our Palestinian campers might not be given permits. The night before we began our staff orientation and training, many staff went out to a local cafe in Ashkelon. Suddenly a siren went off and we saw a rocket in the sky. It looked like it had been intercepted and no damage had been done, but we were all a bit shaken. Would camp be cancelled? Would all that we had worked for be for naught? Would parents let their kids come to camp? Should they? 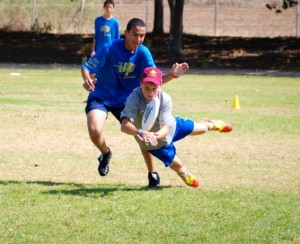 After much consultation with local security experts, army personnel, and reflection amongst ourselves, we decided to proceed. We must have spoken to and reassured at least 40 different parents before and during camp, explaining the protocols and safety plans in detail. Though there were a few jarring booms heard from explosions a few miles away during the week, there were no sirens.

In the end, despite all the tension, the 2014 camps turned out to be our greatest yet. Running two camps in a new setting all at once might have been overwhelming, but this was our fifth year, we have learned a few things, and our volunteer staff proved once again to be world class.

For example: Karym Barhom, our local Middle East Regional Director, had made sure that every last detail was taken care of at Kfar Silver to ensure fun and safety. Nancy Melrose, our Educational Program Director from California, had devised a brilliant schedule and set of activities that allowed both camps to function beautifully side by side and interactively. Ben Spears, our UP fellow from Atlanta who had been living in the region for the past 6 months, had prepared all of the campers for camp, and had trained the local Middle East Coaches in new advanced coaching techniques. Arlen Keen, from Australia, had created and implemented a residential plan that went off without a hitch, even with the drama caused at night with ongoing news from nearby Gaza. These are but a few of the many heroic people that give their time to these youth.

Watch a short video from our emotional 2014 camp season –