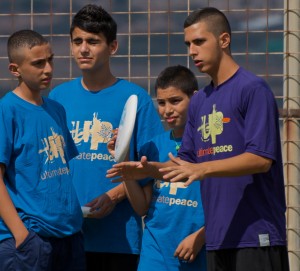 The cornerstone of Ultimate Peace’s success and sustainability is the LIT Program. The program aims to enhance and enrich players’ high school years while preparing them to be future leaders and change-makers in Ultimate Peace, their communities, the Middle East, and beyond. UP players are selected as emergent leaders in their Ultimate communities, and come together as a diverse cohort of athletes and do-gooders for monthly meetings over the course of three years.

In addition to taking on progressively more leadership responsibility in their respective communities, each LIT year is built around a set of skills and a particular focus. The first year emphasizes team identity, and the group is responsible for a project to collaboratively manage a day-long event in UP’s annual summer camp.

The second year invites LITs to participate in our annual Friendship Tour to North America, during which the group gives public presentations, builds deeper and broader connections, and plays in higher level tournaments. (Learn more about past tours here: 2013, 2014, 2015, 2016)

The third year returns to the project model, in which LITs are responsible for envisioning and building projects as individuals or small, cross-cultural groups. Examples have included intensive coaching internships, a women’s beach tournament, a UP parents workshop, and opening a new UP community team. 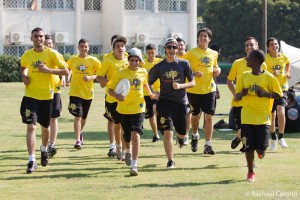 SUCCESS! The idea behind the LIT program is to create empowerment and critical thinking skills that can be universally applicable to leadership in different fields. Their skills in time and project management, active listening, coaching and communication, public speaking, conflict resolution, and creative problem solving augment their ability to build a brighter future – whether they continue coaching or coordinating communities in UP (as many do), or move on to other professional paths.

In 2017, we hit a remarkable benchmark of sustainable programming: UP has selected each and every one of its graduates to become coaches in the annual summer camps, many of them multiple times over. 60% of the current LIT staff is comprised of graduates of the LIT program. This ratio is also reflected in the year-round program coaching staff, in which many other LITs and graduates are coaching in their local communities. LIT graduates also serve as junior staff on the annual tour to North America and help with community logistics, social media, photography, and a myriad of other capacities locally. 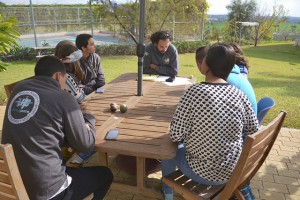 Through their training and experiences, UP has witnessed the LITs becoming increasingly capable in terms of working cooperatively as a group and leading youth as individuals. They have deepened their friendships to the point where they visit one another’s homes outside of the program and maintain consistent contact between activities. There is a palpable dynamic of mutual respect and understanding among the growing number of participants, and moreover, they are spreading it throughout the broader UP Family.

The International LIT Program is a one to two year program for a small group of high school students. After a rigorous application process, mentors help first year International LITs get to know one another through social media and work together to brainstorm fundraising opportunities. Additionally, they get to know their first year ME LIT peers by collaborating to create “LIT Day,” a half day event for the entire summer camp community. During camp, International LITs are expected to step up in a variety of ways, including but not limited to: 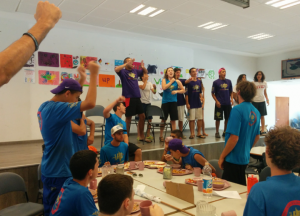 The LIT mentors hold frequent meetings for the whole LIT cohort and specifically for the International LIT cohort so that members can connect, talk, ask questions, share stories, and celebrate successes. Throughout the process, they will gain invaluable leadership, coaching, conflict resolution, and facilitation skills.

International LITs are offered the opportunity to apply again for a second year. Alongside a written application, they submit a project proposal which, if accepted, they are expected to carry out during the year (prior to their second camp experience). Projects should aim to increase exposure to UP, inform others about UP’s mission, and develop the LIT’s leadership skills. Some past projects have included youth Ultimate clinics, hat tournaments, and presentations to educational and/or religious communities. These projects may incorporate, but do not require, a fundraising component to help meet the LIT’s fundraising goal. International LIT mentors work closely with the LITs along the way. At camp, second year International LITs continue to foster the relationships they have gained as well as use their experience to help lead their campers, aid their coaching teams, and facilitate meaningful relationships. 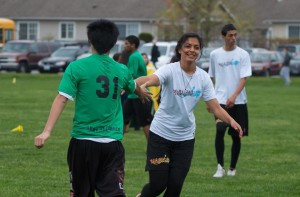 “I am now on teams with Jewish friends. In fact, one of my best friends now is a 17-year old Jewish girl named Raz. She is from a Jewish city, Raanana, near Tel Aviv, and we are very close. I dream of (and we speak of) me being a bridesmaid at her wedding one day.”

“Because of my experience at Ultimate Peace my entire outlook on the Middle Eastern conflict has changed. Next semester I am working with a guy who runs a discussion group between Palestinians and Jews and we are going to turn the group into a formal club. The goal of the club is going to be putting on joint programs for fundraising opportunities for all students at Ohio State. Hopefully the money we raise can go to organizations like Ultimate Peace. If it weren’t for Ultimate Peace I never would be as aware as I am for the need for cooperation and peace in the Middle East..