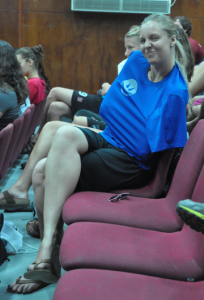 At midnight last night I was handed a list of our players for our Training Camp Boys team. I scrolled the sheet with anticipation: the different names, ages and backgrounds (roughly half Arab and half Jewish) and towns (from 6 different communities across Israel/Palestine). I couldn’t help but wonder how this team would gel, what their unique dynamics would be, having been shaped by their cultures and backgrounds, and how would they all coalesce? What would be our challenges? Our victories?

Hard to imagine it is now 24 hours from that moment as I write and we have had a whole day’s worth of camp and have already had 2 full sessions with our team! We gathered first in the shade of a tall group of heavy-leafed trees. I was reminded quickly of the unique challenges presented by coaching kids in this camp when I received blank looks on many of their faces after saying my first two sentences in English. Thank goodness for my talented assistant coach and CITs (coaches in training) – all not only great personalities and good at engaging the kids but also fantastic at Arabic and Hebrew translation. Really makes you think about what you are saying when it takes you 3 times as long to say it (when adding in the time for the two translations).

Our hours together were filled with team building activities (some unique to ultimate like the game “Wa!” or a Frisbee-passing name-game) and then morphed to Frisbee drills and games, all designed to have the team interact heavily and bring the players together. One of the activities I was most nervous about leading was a flag painting activity – I was worried, since we had teenage boy campers, that they would be totally not into painting a flag. The team did take some encouraging. There were some disagreements at the offset between some of the kids about the design and color of the flags. But overall I was thrilled that not only did the team come up with a creative, unified name, they also, after some deliberation, painted an awesome flag together. Every team member was generally respectful to the others and each made at least 1 significant brush stroke in the overall design (we have 10 team members total). If this flag making process is at all indicative of how the team will come together later in the week, we are off to a good start.