Dani speaks of those that will never be forgotten. 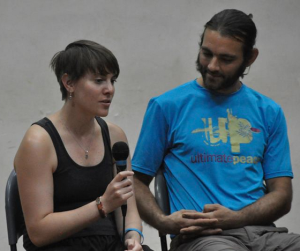 This morning, as my roommates and I got ready for the day, my friend Yasmeen was playing some music. It was a nice way to wake up, with us all preparing together. We were running in and out of the bathroom, the sink area, and the bedroom, relatively calmly getting dressed, brushing teeth, finding sunscreen, and gathering everything we’d need for the morning. First, “Peace” from the band OAR came on, which was a song I’d learned during our CIT graduation ceremony the previous year, and I smiled, thinking of the magic and happiness of that night. Then, “Ain’t no Mountain High Enough” came on and my smile turned to a tear. “Yasmeen!” I said, “You’re gonna make me cry this early in the morning?” (She hadn’t done it on purpose, but you have to understand that this incredible woman brings me to tears constantly through her brilliant ideas and beautiful words, so my crying around her isn’t exactly out of the ordinary.)

Remember the Titans is my favorite movie, and that song is key in it. At first it highlights the differences between the black players and the white players, and then as the movie goes on it tracks their acceptance of one another. At the end, at the funeral of a main character and irreplaceable teammate, the former Titans all begin to sing, quietly, the song that documented their journey together. “Ain’t no Mountain High Enough” has always made me think of this movie, and since beginning my time with Ultimate Peace it takes on an even more meaningful association.

You know that scene where they tell the coaches they want to warm up their own way, and when they take the field they start a synchronized dance to the chant, “Everywhere we go…”? In camp of 2012, my team did that dance for the talent show. It brings back happy memories, of a team brought together and a successful camp, but even as it brings a smile to my face it makes my heart heavy. One of my co-coaches that summer was Sarah, an incredibly competitive, hard-working, Spirited woman.

We lost her, a year and a half ago, to a battle with cancer. At camp the following summer, she was marked into our hearts and our jerseys through the initials etched on our sleeves. Hearing that song will always make me think of Sarah, and her memory continues in this incredible thing we call Ultimate Peace.

But she’s not the only one. She’s not the only person whose presence we miss every day at camp and throughout the year. Between camps 2011 and 2012, we had lost another friend and leader to an accident that left him in a coma. Fadi is alive, his heart beating with the rest of ours, but his condition no longer matches his identity. He was in the first group of CITs, the ones who paved the way for so many more, the ones who are beginning to become the true leaders of our organization and family. We felt his absence during the CIT graduation last year, when he should have been on stage, and we felt it again this year, as the second class graduated with the first class on stage proudly watching. We miss him when we play Ultimate and for me, when I play soccer because we had connected four years ago upon finding out that we were both goalkeepers. We miss him when we talk about the CITs and the graduates because he should be among them, and wherever he is we know he is a part of us, a part of our group, and a part of our hearts.

Though we have grown an incredible amount in the time we have existed, Ultimate Peace is still a relatively small organization. But we have suffered more than our fair share of loss and tragedy. We miss Fadi and we miss Sarah, and we count our blessings every day that a third instrumental member of our UP family is still with us after a serious accident. We have suffered, and yet still we stand. We are weighed down with the heaviness of grief, but we are lifted up by the strength they pass on to us day in and day out. We know they lived for our crazy idea of peace, and we channel that every day at camp and every time we work to create peace in our lives.

In Remember the Titans (based on a true story), one of the team captains – one of the two most influential characters – who helps to bring the team together despite their differences – is in a car accident. One of our leaders, someone who was going to bring change to his life and to so many lives around him and us, was lost in a similar accident. I can’t help but draw the parallels between the two: we are two groups who work to create unity where it seems impossible. The losses both the Titans and we in Ultimate Peace have faced are devastating. We have suffered blows both unfair and unforgiving. And yet we rise. We rise in honor and in memory of Fadi and of Sarah – in honor and memory of those we have lost and those we continue to love each and every day of camp and in the peace-building we do in everyday life. To Fadi, to Sarah, to all who have been lost in the battle for peace: we miss you, we love you, and we are reminded of you each and every day.