For the past several months, I have been living in Israel. The majority of my time I spent studying abroad with Alexander Muss High School in Israel (AMHSI), along with 29 American and Canadian teenagers. While we spent Sunday through Friday morning in school, Saturday was generally our day off or “Open Shabbat”, and an opportunity to go off campus to visit friends and relatives around the country. 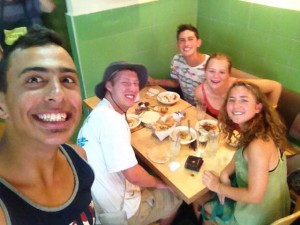 Luckily for me, I had many friends in Israel, all of whom I met through Ultimate Peace (UP), an organization that brings together Israeli Jewish, Arab Israeli, and Palestinian youth through the sport of ultimate frisbee. At the end of my study abroad program, I would be staying on in Israel to participate in UP as a CIT (coach in training) for a second summer. Needless to say, I was excited to see my friends and visit them in their cities and villages.

It is not uncommon for teenagers to travel around Israel on their own or in groups, as the country is so small. With detailed directions from my friends, I took local transportation and visited Noa in Binyamina, Yabi in Raanana, and Hassan in Kabul. Each visit was unique and a chance to experience a different way of life.

As my time at Alexander Muss came to a close, I was disappointed that I hadn’t been able to visit my friend, Mohammed “Hosa” Romman, a Muslim boy I had grown close with through Ultimate Peace. However, I finally got that chance after UP camp ended and it’s a visit I will never forget.

Hosa lives in the small Arab village of Ein Rafa, directly outside of Jerusalem, and I arranged to meet him with three other American friends from Ultimate Peace, Hallie, Keanan and Sarina. When we arrived at the station nearest Jerusalem, Hosa greeted us with lots of hugs, asking if we were hungry and thirsty, and what we wanted to see. We were all very excited to be together and we set off for lunch, Hosa wearing his American flag t-shirt, which he bought during his trip to the US with Ultimate Peace this past spring.

This particular day was the beginning of the Islamic month of Ramadan, the most important Islamic holiday, during which adults fast everyday. As we sat down to lunch outside of the Mahane Yehuda market, Hosa ordered in Hebrew for us beautiful bowls of sabich, eggplant and hardboiled egg atop hummus. Now there were four of us, and three meals. Hosa looked at us and smiled, explaining that he was fasting and not to worry, he would be fine with us eating in front of him. We felt a little guilty but nonetheless ate our lunches, listening as he explained the customs of Ramadan.

After lunch, we walked to the old city of Jerusalem to visit the historical sites. Despite living only a few miles away from Jerusalem, Hosa had never been to the Church of the Holy Sepulchre, one of the most holy places for Christian people. We stood in the courtyard outside, looking around at the people who had come from far away to be at a place in Hosa’s backyard. Before going inside, Hosa threw a longer sleeved shirt over his tank, out of respect. As we toured the church, it didn’t matter that we understood little of the things we were seeing; we just knew and respected the holiness of the place. 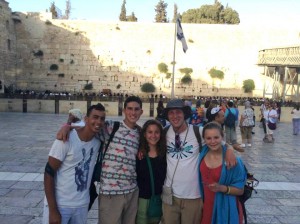 Next, we went to see the Western Wall, another site Hosa had never visited despite living so close. On our way there we walked through the Arab quarter, which was abuzz in preparation for the upcoming festivities that night. Similar to breaking the fast on Yom Kippur, meals during Ramadan resemble feasts and are an occasion to celebrate. Walking down the narrow alleys, past shops selling spices and fabrics, men were hanging lights above us as the evening set in. We could feel the change in atmosphere as we moved from the hubbub of the Arab quarter into the relative calm of the Jewish Quarter. Soon, we arrived at the wall, also known as The Kotel. Hosa, Keanan and I put on kippot and Hallie and Sarina covered themselves with scarves. Leaning against the wall and praying, I turned back to check on the others. Surveying all the people around him, Hosa had the biggest grin on his face. A smile so contagious you couldn’t help but smile back. As we walked away, Hosa tells us he wishes he could take us up to the Temple Mount, so we could experience the three holy places of the three Abrahamic religions; however, we aren’t dressed appropriately and Hallie and Sarina would have to wait behind. Deciding it would be best to stay together, we head out of the Old City. Looking back, we see the Temple Mount resting just above the Kotel, where we were just standing.

After an incredible day in Jerusalem, we board the bus to Hosa’s house in Ein Rafa for Ramadan dinner. Throughout his village lights are strung, illuminating the darkness. The feeling is magical. Stepping into Hosa’s apartment, we are welcomed by his parents. His mother has laid out a delicious meal of rice, chicken, vegetables, along with an assortment of salads made of cucumber, onion, cabbage, tomato, and much more. We sit down to eat with Hosa’s family, including his younger brother, Abdalla (17), who is autistic, and his two younger sisters, Tasnem (11), and Ranem (6). Even though their English is spotty and we speak no Arabic, we do our best to communicate using English words, a lot of hand gestures and smiles. The food tastes amazing and whenever any of us would finish our plate, Hosa’s mother is ready with another helping. It feels like home. 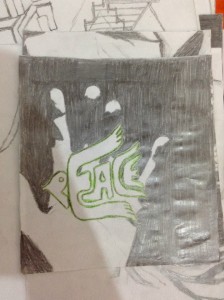 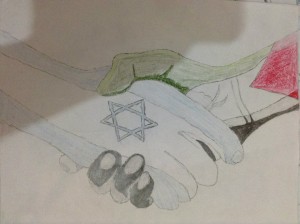 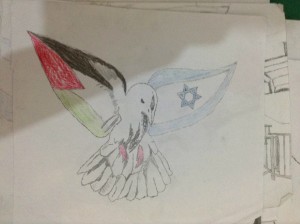 After dinner, Hosa shows us around the house. In his room, there is a big mural, which he drew himself. Amazed, we ask to see more of his work, unaware that our friend is such a talented artist. Reaching under his bed, he pulled out binders of artwork, and as we look through them, a theme becomes apparent. Peace. Every drawing and painting, every sketch is of a dove, of Palestinians and Jews together. This is Hosa’s dream.

As Keanan, Hallie, Sarina and I squeeze into a cab, Hosa’s parents ask the driver, a family friend, to take us back to Tel Aviv. Turning back, we see the fading image of the entire family waving goodbye.

My visit to Ein Rafa was on June 29th. The very next night, the bodies of three Jewish boys who had gone missing two weeks earlier from a West Bank settlement were discovered. This tragedy would spark a war between Hamas in Gaza and Israel that would take place just days after I had left the country. It’s hard to believe that I was with Hosa just a few weeks ago, that we toured the Old City of Jerusalem together and took in the sites. Back home in Seattle, I think of my friends every day and hope for peace.

3 responses to “Traveling After Camp”