Binyamina And Tamra Meet Up

A first for UP – On January 13, 2015,  25 players from Tamra (an Arab Israeli town) came to Binyamina (a Jewish Israeli town) where they met up with 25 local players for a half day of Ultimate and getting to know each other. These ninth-graders are from two schools from two very separated communities. Although all have been participating in weekly Ultimate Peace practices for at least a couple months now, for many it was the first time meeting someone from the other culture.

First, they donned their bright, new UP jerseys and played short games in mixed teams, under the expert guidance of two of our newly minted graduates of the Coaches in Training (CIT) program, seven current CITs, and nine volunteer mentor coaches. 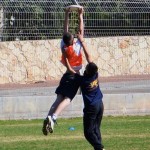 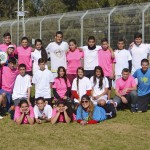 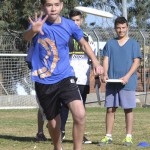 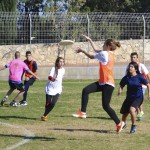 Then was the big event they’d all been preparing for –  the big Tamra vs Binyamina game. The level of play impressed everyone, the level of spirit topped even the coaches high expectations, and the CITs provided a great example for everyone. The final score came on an Ultimate point, and there was never a silent moment from the sideline. It brought the yearlong UP program to a whole new level.

In the end, both sides enthusiastically agreed that we should do this again- and they’re in luck!  The schedule calls for Binyamina to visit Tamra next month – can’t wait!