Ultimate PeaceBlogShowing up for the largest ever UP hat tournament.
By Chelsea LundDecember 31, 2015 Leave a comment

It’s strange to think that I’ve been doing anything for longer than just 3 or 4 years. Nothing ever seems to last more than 4 years, whether it be school, or work. Life just seems to come and go in that kind of time frame, and thought I can’t say I’m old, these chunks of time keep adding up without me trying. It was 7 years ago when I first heard of Ultimate Peace, and about 6 and a half years since I organised my first tournament for them. Still living in DC, the huge ultimate community was eager to come to a round-robin tournament to support a non-profit kid’s based ultimate group. They came, they played, a team won, I don’t even remember which one, but what was important, was they came. Showing up isn’t just half the battle, it’s the reason we exist.

Showing up is what I always try to do. As I’m starting my 4th year as a Year Round Mentor Coach for Ultimate Peace, the inevitable, “is this the end?” question is popping up. I first started coaching the same time I started working full time, on a schedule that didn’t include public transportation on the weekends, made it hard to always show up, but I tried, every Friday. There were even times when I got half way there, only to find out there wasn’t room in the car to practice, so I went back home, but I really always tried. Having a time and a place to be helps me find order and meaning in my life. I thrive on patterns and consistency, but that’s just me. It might just be my 4th year hump, but this year has been challenging for me to get to all the practices I’d like to. My constantly shifting schedule, not being able to consistently give a whole day, or even an afternoon, to something that means so much to me, had not only been frustrating, but I feel something is missing in my life.

Last Saturday, the first Hat Tournament of the year, held so many landmarks for everyone involved. Thanks to the newly organized L.I.T. program, Rageb and Matan (“Basha”), created the foundation for the day to come. It reminded me that things being well organised and planned out, really do make a difference for the better. That though change can be good, consistency is easier, (but that’s just the logisticalator in me talking), and because everyone showed up to play ultimate, it was AWESOME! 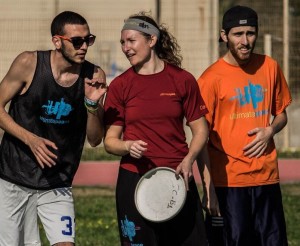 Chelsea consulting with Rai and Adam at the tournament.

180 plus players. The largest ever UP hat tournament. I couldn’t even understand what that meant. I had my team of 11, the Maroon Dragons, and I unfortunately didn’t really stop to look around and see what 180 players looked like. I did hear it though. I saw it on the faces of the players as they ran hard knowing they had subs to take their place at the end of the point. I felt it in the excitement as they waited to hear which team ended up winning since they didn’t get to play everyone. But most of all, I feel it in my bones today when I see the Facebook messages and notes from the kids I haven’t seen since the summer, or even last year, thanking me, and UP for what a great time they had.

Getting back to my point though, it happened because they showed up. They showed up to play, to see their friends, to get out of their house, and be in the amazingly warm sun for the middle of December. When we all show up like this, we get to learn more, not just ultimate, but about each other as well.

In our team huddle at the end of the first game, I asked the players what they wanted to do better in the next game. (What happened next was more likely out of habit than a full understanding of my questions, but it was still fascinating none the less.) The first thing said was defense, I asked what that meant, and they said staying close to your person (YES! point for the ultimate team). The second thing said was integrity. Again, I asked what he meant, and they said being honest (YES AGAIN! point for the UP team).

We talked a little more about integrity on the field. I asked why they came, they said to play, and have fun. and of course, *SPIRIT* ! Against the other team in the first game, I didn’t have any real complaints about their spirit, but amongst themselves, they got frustrated and angry when the disc got dropped. I asked them how they felt when they got yelled at. No one liked it. I commented, you didn’t show up to get yelled at right? Of course not. So lets hold our own team to a higher level of integrity and say “it’s ok, you’ll get it next time.” And even for ourselves, by making sure it’s a good throw and at the right time.

The next game was like watching gear starting to turn for the first time after getting a good greasing. These players showed up! The level of play went beyond what I could have even hoped for. Once the team started working more as a whole, I could give individual players goals and tips for their play. One goal was to make sure a player threw to every player on the field before the end of the point. Another was to just run deep, while another’s was to just run. You can tell any athlete until you’re blue in the face how to play, but if they don’t show up, you’ll just be blue in the face.

How can you help? Show up to your local Ultimate community, share what you know about Ultimate Peace. Show up here, coach at camp, or better, volunteer for the year round program. Show up to your everyday life, and live the 5 values. Show up to yourself, be honest, and be true about who you are. Just show up, and you’ll get to experience it.

From Terror to Comfort, From Fear to Action

UP Alumni Profile: Hosa – From Camper to Staff