New York greeted Ultimate Peace’s Friendship Tour 2014 with some wind and rain, free hugs and amazing hospitality! The UP Tour 2014 is now in full swing! 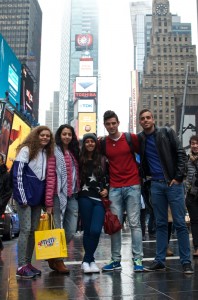 All twelve Coaches in Training (CITs) departed from Tel Aviv early Monday morning…and before taking off they took about fifty selfies. We arrived in New York in two separate groups, dispersing to many host homes around Manhattan.

We recognized some of the faces and families that greeted us – former Camp UP coaches and CITs have coordinated with many Jewish parents to host. There is therefore some language, some religion, and some culture in common. Also, we quickly befriended the guy walking through Times Square with a poster hanging around his neck that read “Free Hugs!”

Tuesday, the first full day in US, our group started with walking across Times Square and to the Top of the Rock (Rockefeller Center Observation Deck) – a little cloud/visibility delay would not stop us. The view turned out to be incredible. One CIT looked out over the city’s five boroughs and asked “Is this all New York?” 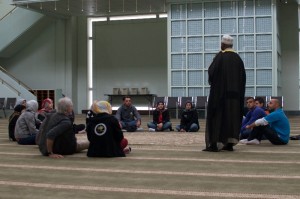 Just before lunch, we visited the Islamic Cultural Center of New York, a beautiful expanse that, according to the New York Times, was the city’s first structure “to be planned and built as a mosque” (link). From there, we went to a fun lunch, where the staff greeted us warmly (gave our group a couple of free treats) and we took over the upstairs seating area. Finally we held a joint practice/scrimmage with Heschel Heat, the school’s ultimate team.

Today (Wednesday) we are giving a few formal presentations, first at the Heschel School to classes and an assembly, then at a community-wide event in a huge venue! Then tomorrow its on to Atlanta for time with other hosts, events at the Paideia School, and ultimate tournaments! 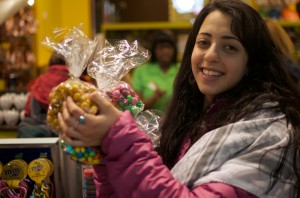 Early candidates for songs of the tour: Hey Brother and Dark Horse.