This is the last 2/5ths of an essay I wrote to help me deal with everything swimming through my head this week.  I think these two parts stand on their own, but if you are ambitious enough please check out the full version.

The coaches with UP’s year round program are always an eclectic bunch.  There are some transplants from the US, like myself.  There are local Israeli born players.  And there are the foreigners, the Americans and Europeans who are in the region temporarily for anywhere between two months to four years.  These three groups come together to create a cadre of coaches who travel everywhere from Jericho to Tamra, from Binyamina to Ein Rafa, and many places in between.

We drive together, coach together, gorge on humus and shwarma together.  We share in the ups and downs of a yearlong program coaching in all these communities.  We share stories of little kids with amazing forehands, or shy players coming out of their shells.  This is a family that goes on a journey together.

Sarah came to practices with Hucking Crazy sporadically at first; she was not totally settled in Haifa yet.  She began coming to local HAT tournaments.  [Local as in National, not as in Haifa.  Israel is small enough that sometimes ‘local’ and ‘national’ mean the same thing.] When UP’s Ongoing Program started picking up steam, we drafted Sarah and she was right on board committing to regular weekly practices and scaring the other coaches with her carefree attitudes about driving.

Her smile always lightened up a practice, and her intensity gave it that little extra push.  “Come on, you can do it!”  “Give it a try!”  “Yes!”

There are scores of young men and women who have gone through a UP event and have come out the other side stronger and more self confident because of Sarah.  And there are handfuls of coaches who can say the same.

Her teams at camp were always some of the loudest, and were always ready to go when tournament time rolled around.  She was usually one of the first to start a prank war among the coaches or to support you when you were feeling down. 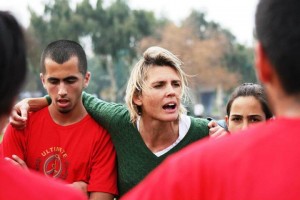 She was also the coach who brought the first team of Arab players, Tamra’s Phoenix to a national Israeli tournament in December of 2011.

When Sarah left to return to Los Angles after two plus years coaching with UP, we all felt the loss.  When we heard that she had been diagnosed with cancer, we all felt her pain.

Time differences between countries sometimes make for different perspectives.  I awoke Saturday morning to the news that three Carleton students, members of CUT on their way to the airport to fly out to a tournament, had been killed in a car accident and two of their teammates had been injured.

I had never met James, Paxton or Michael nor Conor or William.  [To close another circle, William is from my home town.]  I have never heard of them before this week, but Carleton and CUT are a part of my family, so I grieve along with their teammates.  I also piled into cars as a college Ultimate player.  I drive to and from practices and tournaments in various states of exhaustion and weather conditions to this day.  I don’t think I have the words to articulate what that kind of loss would feel like.

Across Facebook, friends were swapping out their profile pictures for the CUT logo.

Sunday I woke up to the news that Sarah had passed away.

The UP community exploded with Facebook comments.  Tears welled up in my eyes as I read some of the initial reactions.  “She’ll be missed.”  “An angel has fallen.”   I felt the need to post something myself, nothing too profound, just a little something to acknowledge to the internet that I too was morning my friend.   [I’m wary of virtual relationships, and was a late adopter of Facebook, but I can’t imagine how I would have dealt with my Ultimate family being so spread out without that tool this week.]

I had a busy day scheduled for Sunday with meetings and practices.  Fortunately, I had partners with me the whole day.  After our morning meetings and humus in Nazareth, we relocated to a coffee shop for Wi-Fi, which wasn’t working.  We hunkered down to business, furiously typing and clicking our way through a long list of tasks.  Periodically as we sat there I would stop, pause, and ask “What are we going to do with practice today?”

Each time, I got the same response: “So you will start with something and then…” But I never heard the next part because THAT was the part I was stuck on.  What do you start with?  How do you talk to these teenagers about this with only minutes to talk and then transition into practice?  He was showing a quiet confidence in my ability to open the practice, and his confidence in me was enough to help me overcome my trepidations stepping into this unknown situation. 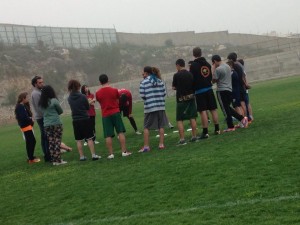 After a few minutes of unorganized throwing and somber hellos, I gathered Tamra Phoenix into a circle for our usual practice opening conversation.  I still didn’t know what I was going to say.  To be perfectly honest, looking back I still can’t tell you what I said.  I think I talked about family and community and supporting each other.  I think I probably shared a story about Sarah, and I probably said something about honoring Sarah by doing our best on the field for the next hour and a half and on into the future.  But it was probably not nearly that articulate.

Their warm up lap was one of the quietest I have ever witnessed.  The rest of the practice went smoothly, although we could all feel the emotionality of the day weighing down on everything.

I returned home and crashed, physically and emotionally exhausted.  The next couple days were (are) a blur.

Spending that Sunday with partners made it bearable.  Friends outside the Ultimate community have tried to support me, but there is no substitute for the arms of someone who is also experiencing similar emotions.

The UP family and the Carleton family both suffered losses this week.  For me those communities overlap; I can’t separate them.

The Greater Ultimate Community lost four dear souls way too early.  How we will honor them will be discussed in the coming weeks and months.  How each of us comes to terms with this loss we will be different, but having a family to do that with makes it just a little bit more bearable.  I hope that everyone is as fortunate as I am to have such a wide and interconnected family to lean on in times like these. 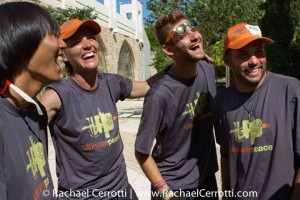 One response to “My Ultimate Family”