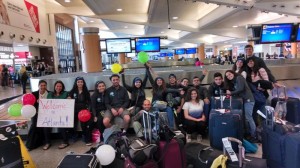 The Ultimate Peace Tour 2014 landed in Atlanta today to great weather and new, wonderful friends. The second stop on the CIT Tour is happening!

Everyone landed at the Atlanta airport and was greeted with balloons and posters. Because its Ben’s hometown, he brought his cousin to meet us at the airport. All the CITs got a balloon and some new UP gear to play in this weekend – thanks to Five Ultimate! 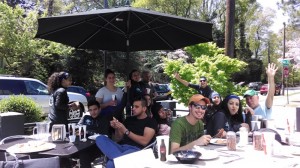 Then we had lunch out in the sun of Atlanta’s spring. A complete stranger even joined Raz and the group in singing songs on the restaurant deck. Emory University hosted us at their beautiful fields for a short UP practice and some scrimmage time with the men’s and women’s ultimate teams. 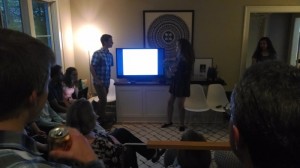 Then we capped off the night with a huge fundraiser at a host parent’s home. Yonatan and Shada presented, Yasmin gave a great talk, and we held a panel (though it was shorter than usual). Everyone gathered together to leave with their Atlanta hosts.

We are looking forward to being at Paideia tomorrow morning for class visits and an all-school assembly. One day away from the tournaments, so we are getting excited for that, too!